As seen so far, a variable can store only one value. However, through arrays it is possible to store more than one value in a variable.

Arrays are declared in a slight different way than variables.

The Arrays have index to locate where data is being stored.

By default, VBA considers 0 as the first index element, so the above example has 3 elements:

Another way to declare a 3 elements array is to define the beginning and end in the index declaration.

In case above, we have a slightly different index arrangement, beginning at (1) and ending at (3), according to statement.

If you are trying to associate a value with an undefined index (not declared in the array declaration), you will get an execution error: 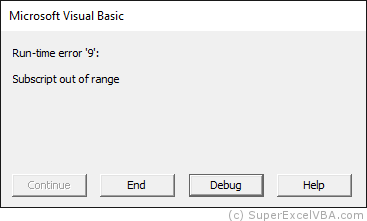 The table below summarizes the ways to declare an array of defined size:

It is not possible to create arrays starting with negative indexes.

By declaring an array that has at least two dimensions (separated by commas) we create a matrix:

We assign values to this matrix in a way similar to arrays, specifying the element in which we want to assign a value:

Similarly to arrays, we can specify the indexes with beginning and end.

We can also merge the declaration:

To copy and paste values from a matrix to a worksheet and vice versa, or to transpose the matrix, see the topic : Matrix Range.

If you do not know the size of your array, you can choose to use dynamic arrays, where the limits are defined after the declaration.

By using the Array function, you can transform elements of different data types into an array:

However this practice is not recommended in order to avoid posterior data type errors, for example in loops.

SuperExcelVBA.com is learning website. Examples might be simplified to improve reading and basic understanding. Tutorials, references, and examples are constantly reviewed to avoid errors, but we cannot warrant full correctness of all content. All Rights Reserved.

Excel ® is a registered trademark of the Microsoft Corporation.

Thank you for contributing. A message was sent reporting your comment.